Oh say it isnt so. Number 3, also known as Ollie was wheezing. It's pretty normal for him he does it everyday. I give him Pulmicort and it dissipates. Well this morning it didnt. It got better for a while but when he was taking a nap I could hear him wheezing via the monitor. I knew it was bad. So I went in to check him and he was fully awake. I got him up and he was very happy and smiley. I thought that was strange if he was wheezing so much then the barking started. Shit!! I knew that this was beyond my capability at home. I called the pediatrician and said those code words of " I have a ex-27 weeker who is wheezing, barking like a seal and his chest is contracting more than normal." Out the door we went.

He received some Albuterol in the office and I thought he was better. But the ped we saw didnt think so. So off to the ER we went. Oh how I loathe the ER. I used to work in the hospital that we went to so I called around to see if anyone I knew was around. Apparently there was a sick out or a lot of people playing hooky today. So I sat us next to the fish tank. Ollie loved watching the fish and fell asleep. At this point there is no wheezing going on. An hour and half later we were called back. He was so wiggly and happy that it was hard to imagine him barking like a seal. He received some dexamethasone and had two chest x-rays. He was given the official diagnosis of Croup. The attending that came to talk to me was so good looking that I all I could do was smile and nod to keep from throwing him down on the gurney and having my way with him. I am a married woman for Pete's sake. Maybe I dont get out much anymore? Or maybe I was so grateful to hear that he didnt have to be admitted and we only spoke the word "ventilator" in the past tense. Who knows. That's really not like me. Or maybe I need to get out more with my "hunk" magnet Oliver. 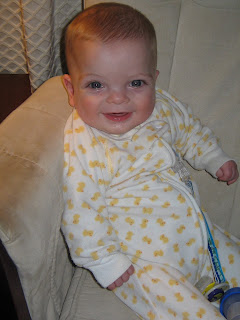 He is soo cute! Is that a preemieYum outfit? lol, we had tons of those! 2 with little yellow duckies!