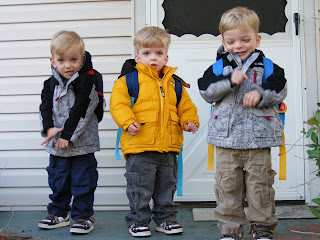 Its been a few weeks but the boys have successfully gone to and from school on the bus. They successfully have adapted to the morning routine. Two of them love school and have decided that school, well I should correct myself, riding on the school bus is awesome! Now Ollie on the other hand is having a hard time. He is the youngest in his class and by far the smallest. All the other boys in his class are starting Kindergarten in the Fall. A few have taken him under their wing, which is really cool. But he still gives us that LOOK after he walks up the steps of the bus. I know that he doesnt want to go. I received an email from his teacher asking many questions about him and his behavior. I knew there had to be one in the bunch that wouldnt like the school thing. Ollie scratched the teacher. Uh Oh. He has also been really aggressive with me and his brothers. Hitting and kicking and pushing and pulling. Its really out of character for him. But he is now 3 so maybe that's just part of turning three. By the time he decides that he likes school it will be summer break. Then the struggle begins again in August. Ugh.

With school comes the exposure to other snotty nose little kids and all their germs. The boys have successfully be come infected with said germs. Ian was home a few days last week. Ollie and Spence were home this week. Ugh. I thought the mornings were "me" time. Little did I know that I would have to give up my precious 3.5 hours and become a Mom again in the morning this soon. Oh wait, I forgot to tell you, the boys go to school 5 DAYS A WEEK!!!! YAHOOO!!!! :)

Yayyyyy! Hopefully they will get the sickies out of the way soon!!! I cannot believe how grown up they look!!!

I won a blog makeover from Krizzy Designs. I'm still getting used to it...it's a little busy! =)