The shit hit the fan

Yeah so I am a terrible blogger. I havent updated in over a month. Believe me life is crazy with three little teething monsters. Ollie has two teeth and Spencer and Ian have one with the other coming in very slowly. Everyone had a bad cold including me. Having a cold sucks but when taking care of the boys there is no downtime at all. I think that was the week that Oliver decided that he didnt need a nap. Oh it was bad but we lived through it and no one had to go to the doctor or ER so I guess we are lucky. 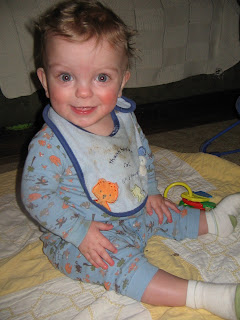 The boys are officially 11 months old today. But as far as preemies go they are really 8 months old developmentally. This confuses a lot of people. I try to explain it to them but they dont get it. Ian and Spencer are crawling around backwards. Oliver is still just grabbing his feet and rolling from side to side. He wants no part of sitting up so I bought a Bumbo seat. Today was the first day for the seat and he isnt too happy about it but I dont care. He needs to grow up and get with the program. No I am not being harsh. He is just kinda slow at things and needs to be pushed. He was like that in the NICU to. He was the last one there and it seemed like he was never going to come home. All of them are going to be re-evalutated by PT, OT, DT, and Speech Therapy in the next month. I forsee some intervention coming his way. Although he is more verbal than the other two. He will mimick the sounds that I make and talk and talk. Ian and Spence just kinda babble, scream, and growl, which is good to. 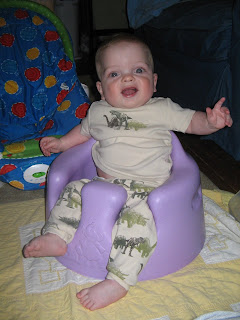 The MIL got sick the week before we did. I wouldnt let her come over but since she was taking antibiotics she thought she was safe. I know better. So the FIL came over to "help" which really isnt much help at all. I am very uncomforatable in my own home when they come over. Its like she takes over and I am a kid doing whatever she says. They were going on a cruise to the Mexican Riveria and the night before she came over. By that time I was sick as a dog, and she was quick to point out how awful I looked. Thanks, thanks a lot. Anyway they were gone for a week and a half and it was glorious eventhough we were all sick. So when they returned on Tuesday night they called and I didnt answer or call back. I leave that to DH. He has school on Monday and Tuesday nights. Next morning she calls again. I dont answer because I know she wants to come over and I am not really wanting that. Since I didnt answer she has FIL call DH and they get his voicemail. SO since no one answered then something must be wrong. DH calls a little later and says that they can come over after he gets home from work. He hadnt seen the boys in 3 days because of school and working on projects. I thank him, because I was in no mood for her. He comes home around 4pm and I asked him if he thinks I should leave because I know something bad is going to happen. He says no. I think differently but figure the MIL will behave if her son is here. 5 o'clock rolls around and they are here with dinner. Great fine whatever. She walks in with an arm full of clothes for the boys and says that I look tired. Fine, I am tired, all the time. Then she asks about the boys. I start to give her the rundown on who is still sick and she says, " They got the cold from you because I stayed away." So I say in a very smart ass tone, "well you came into the house while you were sick and coughed." She turns around puts her shoes back on and says, "that's it. I am out of here." and walks out. FIL stands there dumbfounded and asks what happened. When I recount the exchange he shakes his head. Next thing you know she starts up her van and peels out of the driveway. 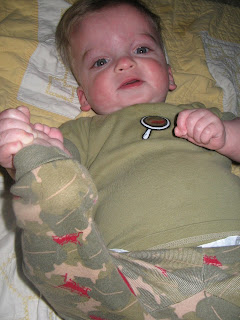 First of all I know that the boys are going to get sick no matter what. I dont blame her for the cold. DH works in a hospital so he brings bugs home all the time. The thing that gets me is that when I ask her to wash her hands before she picks up the boys she gets offended. In fact on my birthday we took the boys to her house and when I reminded her to wash her hands she asked if there was something that I was worried about. I told her that its just proper hygiene when handling infants. So you can see where this is going. Second, she is upset that she had to stay away while she was sick and everyone else got to come over without her. Third she is a baby. Fourth, she is upset that I wouldnt let her come over during the day to "help". I am sick and tired of hearing that I need to take a nap or get out of the house. Yes I know but I dont want to do those things so she can play Grandma. And I am stuborn. If I think someone wants me to leave then that makes me suspect that something is going on. Lastly, is that I feel like she undermines whatever I do because the boys are not genetically related to me. Maybe this is my imagination but she has said to me on more than one occassion that maybe I was never meant to be a mother. Thats why I had to go to extremes. WTF!!! DH was part of the problem and we almost had to use donor sperm but she doesnt remember that. I dont really know how to explain it but it just seems like that is the real reason. Like I have no business raising these boys or something. Perhaps she thinks that she could do a better job? Who knows but I know one thing for sure is that she couldnt handle three little hooligans day in day out. She can barely handle them when she is here.
Neither of us have heard from her. I dont think she can hold out much longer because she wants to see the boys. I want an apology. DH wants an apology. She is crazy! I have decided that I dont need them to come over anymore when DH isnt here. I would rather suffer than deal with her infantile ways. Like I dont have enough to deal with. Sheesh!
Posted by 3 good eggs at 9:21 PM