One year check up with the Neonatologist.......

Tomorrow the boys are going for their one year check up with the Neonatologist. I am always aprehensive when it comes to taking them to the doctor, especially her. She is a great doc but we have had our problems in the NICU and beyond. Last time we saw her was right after Thanksgiving. The visit was good and there were no lectures just nice words of praise for DH and me. Which is great but this visit will be a little different. Ian is doing fine no developmental problems at all. Spencer has a 15% delay with his gross motor skills but working in the right direction. He also has some feeding issues that the OT will help us with but we wont see her for a few weeks. Oliver is the one that has always been the slower of the three. Not sure if its because he is the youngest, by a minute, or because he was in the NICU the longest and had the worst problems with BPD. Whatever the case he needs to have OT and PT. The PT said that he has a 38% delay but is showing signs of doing what he is supposed to be doing for his age. OT didnt say what kind of delay he had but said that he would need some therapy. There is a meeting next week to go over who needs what with all the services. So I am a little nervous as to what she will say. I am not really sure why I worry, cause to be honest we arent seeking any services from her hospital and going to the competing hospital that our Ped has priveldges at. And this may be one of the last times that we see her.

I suppose its just part of PTSD surfacing again. Its much better than it was and I am on Zoloft which really helps. Its just the feeling of being helpless again and wanting my boys to be alright. They say that by age 2 all preemies catch up to their peers. I have found many people who refute this statement. I know there isnt much I can do about what affects the boys but it still is hard. I am trying to be informed as much as possible and keeping on top of their problems, such as the myriad of services that just evaluated them. So I guess I am doing all the right things. All I can do is when I see a problem rally the troops and get them the help that they need.

Whatever the is causing my aphrehension at least I get to get out of the house tomorrow and talk to adults!! That's always a good thing. :)

Here is a new pic of the boys all together. Ian is the one on the floor, Ollie is in the chair on the right and Spence is on the left. Dont they look happy...... 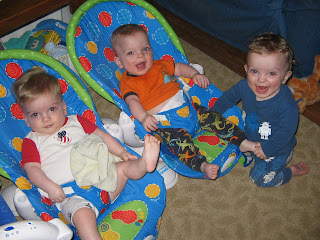 Big hug to you and your guys. They are so darned cute... Anyway, I just wanted to let you know that I understand your panic, since I share it...it's hard to have babies who are born so early...big hugs to you!

Abby,
Thanks for the support. I dont know why I stress but I just do. Things turned out way better than I expected and I am very pleased. I really cant take credit because its the boys that are making the progress. I am just their humble servant. :)
I will post about it later.
Christine