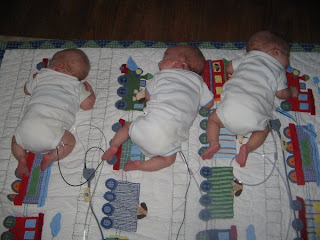 The boys made it to their first birthday!! I had no doubt they would, well sometimes in the beginning I did, and it was fun. We went to Grandma's house for Easter and she had presents for the boys. They didnt really know what to do except to chew on the huge ribbons from the packages. Then off to a friends house to celebrate with some honorary Aunties and Uncles. I used to be a nanny for the family and spent most of my 20's and early 30's with them. All five kids were there and it was so much fun. They love the boys and it was great to see them having fun with them. They are such great kids and young adults.

Monday we all went to the NICU to see our beloved nurses. The boys brought them cupcakes in honor of the birthday. They also wore onesies that had their letter on them. Ian was "A", Spencer was "B" and Oliver was "C". They also had their time of birth on the back of their onesies. The nurses really got a kick out of it!! I did it for them. For those who dont know what I am talking about when there are mulitiples they are known as Baby A, B, or C. Depending on how many there are. You get the picture. Anyway I was so happy to see them, and they were thrilled to see the boys. I really do miss those wonderful ladies. When we were there I mentioned that I would love to come in and talk to Moms that are stressed about their babies and what is going on in the NICU. One of them mentioned that there was a Mom there right now that was freaking out because her son has BPD and is about to be discharged on a monitor and O2. They wanted to show her Oliver, who had serious issues with BPD, so she could see that babies do survive and grow up like other kids. I immediately said to bring her over! She was so sweet and asked tons of questions and then asked if I wanted to meet her son, which of course I did. Her sister and Mom were there as well and had many questions which I answered and I gave her my phone number. We live in neighboring towns. Later the next day DH called and said that he had lunch with the Nurse Manager of the NICU and she thought it would be a great idea to start a support group in the NICU because they didnt have one. So I am on it!! It's not that the nurses didnt give me tons of encouragement and support but it would have been much different hearing from another Mom who's child had the same issues. So I am excited. 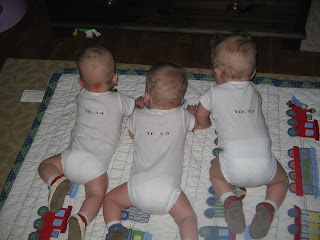 Thursday the boys had their one year check up, immunizations, and blood draw. They, of course, didnt like the shots, but did amazingly well with the blood draw. The only one that fussed was Ian and it was because Daddy was holding him tight and he wanted to be free!!

Thanks for stopping by :)

Your boys sare abssolutely beautiful. I love going back to the NICU with Caitlyn and seeing the nurses. The parents that are there when we visit always want to "check her out" too ;) Gives them just a bit more hope I think.

The one thing that was missing from my NICU was a support group. So stay on that! I think it can be a wonderful thing!

Looking forward to reading more about your little guys!

Hi Nancy!
Thanks for coming by. I think the support group is a wonderful and I hope I am not too busy here at home dealing with irrational teething boys to get things started!!!
Christine

Happy birthday, Ian, Spencer and Oliver! You guys look marvelous. And your mommy is so proud of you!! I'm glad that you got to go back to your NICU and visit your nurses and, even more importantly, offer encouragement to all the parents who are freaked out just like we were (and sometimes still are).