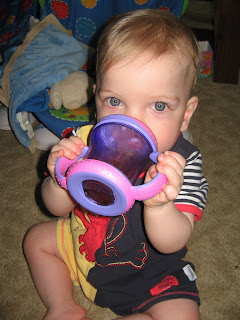 Look who's finally holding his own cup!! Its Ollie!! He also started holding his own bottle to. It had been quite a battle to get him to do this, but I kinda gave up a few weeks ago. Just the other day he decided that he could hold his own "ba". Fine if it had to be his idea then so be it. I took this picture to show his OT who had been trying to get him to want to hold his bottle for a long time. She was on vacation last week. When she came in today I handed her the pictures and said "this is what Ollie did during your vacation." She was so proud. I am to!

Oh yeah before I forget, the carpet is being installed in the basement on Tuesday!!!!!!! I cant believe that we are almost done. Its been a long project but it looks good. Now I just hope that the carpet I picked out goes with the paint thats on the wall. I never thought to ask for a small sample to take home.....oops.

Also in case you were wondering, I am feeling much better on Yaz. I knew that a change in pill would make things better. I am still kinda crabby but I have always been that way. :)