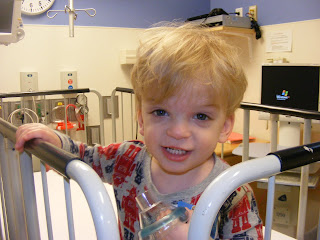 Wow I cant say enough about the staff at St. Louis Children's Hospital. They were excellent today. Our ENT doc is awesome. We arrived at 6am and was met by a lady from the registration department and she took us to Same day surgery and checked us in and explained things in detail. Then came our nurses they were great as well. Spence was done before 8am and we arrived home at 9:04am. It was an easy day for us. Spencer faired remarkably well without his MILK. I dont think he even noticed it wasnt around. But when time came in the recovery process that he could have some juice he drank down the whole sippy cup in two gulps!! He wasnt too happy and I think was in a little bit of pain but he got some more pain meds and he was very content. He took a 4 hour nap and has eaten a little bit this afternoon and evening. He amazed me today. He did fine. 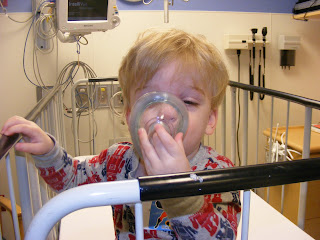 The best part of the day was that he didnt have to be intubated or completely sedated. All they use is nitrous oxide aka laughing gas. He was done with his surgery in 10 minutes. I was so worried about an IV and the intubation that I was beaming that it wasnt going to happen. Before they took him to the surgery suite they gave him a little mask that smelled like bubble gum and the nurse anesthesist showed him what to do and he had no problem. It seemed way to easy! But that's a good thing.

As he was being discharged the nurse was going over his restrictions and what dose of tylenol he should receive. He kept asking if we had any questions and both DH and I said, "No." Then I said "I dont mean to sound so casual but this procedure was nothing like the NICU experience and we survived that." The nurse replied, "You got that right!"

Glad to hear that all is well! That is great!!! One surgery down...now mom just needs to get all taken care of & you guys will be just like new! =)

I didn't know you were in the STL area. I'm originally from there.
Glad the stay went well.
Diane

Hey Diane,
Where are you now? Do you miss the area? I have lived here and in Colorado during my younger years. My grandma was here and she was ill so we moved back to stl and I just stayed. I like it but would love to live in the mountains again sometime. Its so beautiful out west. :)
Christine